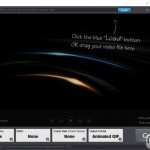 Video to GIF converts almost all the video formats such as (AVI, MPEG, MP4, WMV, MKV, MOV, VOB, WebM, RMVB and many more etc.) to not only animated GIF, but also other commonly used image files (like JPG, BMP, TGA, PNG, TIF, etc). It has great processing speed and lower quality loss, you to view animations as well as original video file easily.

Video to GIF converter makes it possible for you to play video clips in GIF file. You can set 24 frames per second to get output GIF as same as original video or set 1 frame per second to get animated GIF with small size.

No plug-in is required, you can publish the output GIF file on your web page by just using common HTML tag. Video to GIF is what exactly you desire for.

{Get started with Video to GIF converter}

Installation process is very simple and easy to go through each and every step. Takes just 1-2 minutes to install. After you done with installation the main window will open and you all set-up to create your own GIF animations from your videos. You just have to load any one of your video and customize your settings according to your requirements. Video to GIF gives you ability to customized resolution, so you don’t have to worry about the resizing output file later on. Video to GIF in built effects settings let you choose from many effect which will make your animation more awesome. Video to GIF let you customized Frame Rates and ability to choose output file formats. When you done with all your personalized settings, just click Convert button, and your video will be converted to GIF animation.

Extract all frames of a video into separated image files with ease. Images captured can be converted to all popular formats, such as JPG, GIF, BMP, PNG, etc.

User can change the value of output frame rate (how many pictures per second) to control the speed, which is the unique advantage comparing with other similar programs.

Convert video to a single image including multi-pictures in a simple arrangement.

Keep the resolution of output image file as original or set a new size that you want.

Video to GIFcan be used as a video player with some basic functions, like pause, stop, snapshot, etc. It also well supports all key video formats.

Aug 13, 2015Amit Verma
Get Started with Android M Preview 2 on a Nexus 5Independence Day : 20 Freedom Quotes to Inspire You